Journey of a Warrior

Home : Journey of a Warrior

Avid hiker and Southern Wesleyan University Business Professor Jonathan Young is ready to “go the distance” to benefit business majors. Starting out in September, Prof. Young will hike for 40 days on the Appalachian Trail, spanning 500 miles of the trail in Maryland, West Virginia, and Virginia.

Support Prof. Young's hike and the SWU School of Business

You can get involved by supporting Prof. Young's hike. All donations will support Southern Wesleyan’s School of Business to endow business scholarships and help provide state-of-the-art equipment and renovations for the school’s new location at Stuart-Bennett Hall.

Let's show our support to Prof. Young and the SWU School of Business! You could pledge support for $1 per mile of Young's hike, or any amount that you'd like to give to encourage Prof. Young on his journey and support these scholarships!

Donors can also designate their support to other areas of need if they would prefer.

Giving to Southern Wesleyan is easy! We offer several convenient options for making a gift.

You can give online using our secure electronic form.

Prefer to write a check for a gift? Simply write "Journey of a Warrior" in the memo line of the check and mail it to:

Due to physical issues, specifically pain and swelling in his knees and left foot, Jon has made a difficult decision to suspend his journey down the Appalachian Trail; however, we encourage you to continue in your support of the School of Business with your donations to benefit students for years to come. He hopes to complete his journey early next spring after some time to recuperate.

For now, take a look back on Jon's journey during Fall 2017. 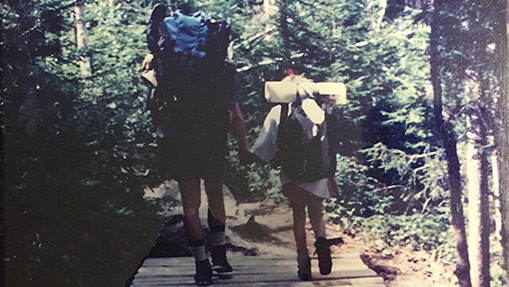 Jon and his daughter Laurie on a hike when she was a child. 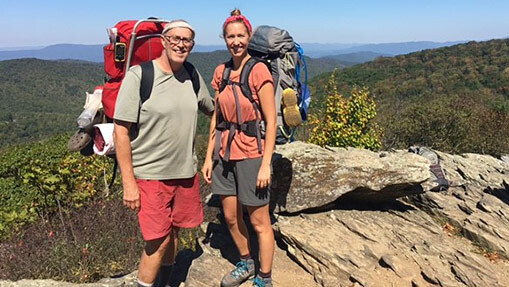 Jon and Laurie hiked together for a portion of his hike in Fall 2017.

In Jon’s own words:

“It’s just wonderful to be out there and see just how beautiful things are. Also, being with my daughter for nine days. I thought this poor girl could go six, seven or eight miles further each day like these young kids I was meeting. But having her the last nine days psychologically was really helpful to me.”

“This growing recognition that my knee was not even stabilizing, just getting worse.  Towards the end of the hike, if I could do 10 miles that was a great day. When I first started off I hiked 15 miles. Day three, it was around 12 miles. Another low – just this emotional awareness of what was going on in the outside world, and it just kept wearing on me. I’d go to bed at night and put my radio on and try to find a station. I had a little AM/FM radio with me. When I could get a good station, I’d hear about the hurricane. I kept thinking about these millions of people in Florida and the Caribbean. It can pull your mind away.”

“In Shenandoah my daughter and I encountered bears six different times. Plenty of snakes. My daughter and I were somewhere in Shenandoah (National Park) and we crossed the road. – We were maybe half a mile up this trail. She was in front of me and jumped – ‘a snake!’ It was a black snake. The very first shelter we came to, we had just gotten in and we’re talking to some other hikers. Laura was talking about setting up a tent at the shelter. One of the guys said, ‘look at that!’ and there was a black snake moving along the rafter. That’s actually not bad because they eat rodents. So when you’re in a shelter and there are snakes around, you don’t usually have to worry about mice. One afternoon after we had set our tents up, as I was walking up to where the tent was, a black snake crossed the path and I said ‘sure, why not?’ I saw deer. Early on I saw a turtle – again you say ‘wow! Isn’t it wonderful out here?’

My daughter wanted to get a picture of a bear and cubs. We were going into one of the waysides in Shenandoah and we passed a hiker going northbound who said he saw a mother and two cubs. We were down the trail. As we’re going down this path, she saw some bears moving. Sure enough, there was a mother and two cubs in the woods. You move slowly. We moved around. She actually got a picture of the mother looking at her. We stood there for a while and watched and went on to the wayside and an hour later we came back and then they were gone. She was absolutely thrilled with that. I said ‘make sure that you can see everybody (bears)’ and she said I think we’re okay.”

“Late in the day we were in a flat spot where we set up our tent. We had passed Skyland Lodge in Shenandoah. We stopped to get water because water sources were few and far between. That was 5 o’clock – one of our later days. We were walking down the trail and I looked over to my right. Literally from here to that lamp there were two deer laying down next to the trail. They didn’t spook at all, they didn’t jump. It was dark enough that they may have assumed we didn’t see them.”

“I have carried a Bible with me on most of these trips now for decades. Years ago, I came upon this little 1-inch by 1-inch Bible. It’s not a whole Bible, but there are verses in it from every book of the Bible. It’s all beat up from being in and out of my pack. It’s got an evening prayer and a morning prayer, but it weighs a fraction of an ounce and it always goes with me on these trips. I would read the prayer in the morning and the evening and would always be thankful for what I have had or what I’ll have the coming day. It’s probably done most of the AT with me. There’s a certain comfort in reading it.”

Jon came off the trail tired, sweaty and discouraged when he encountered a group of scouts. When the scouts would start asking him questions about his hike, his focus on the negatives of his experience changed. Going into professor mode, Young would answer the scouts’ questions and talk about his hiking experiences.

“There were a lot of them there and I didn’t want to invade their space. One of the dads invited me to come in. It just changed my whole attitude in five minutes,” Jon said. 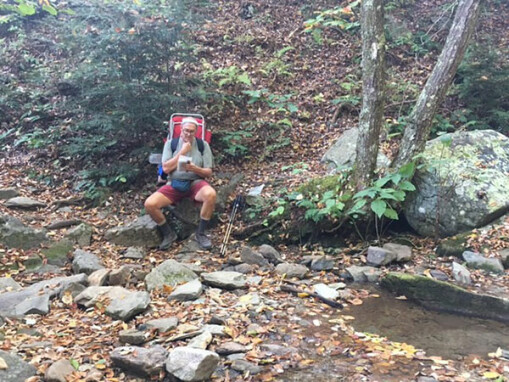 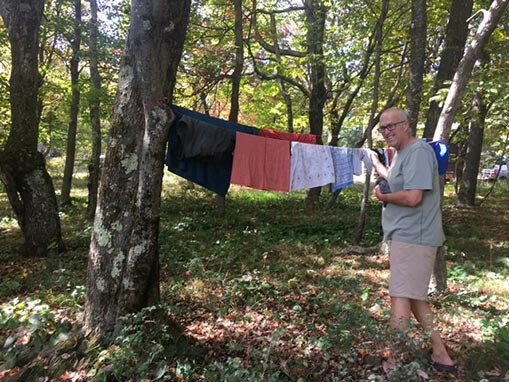 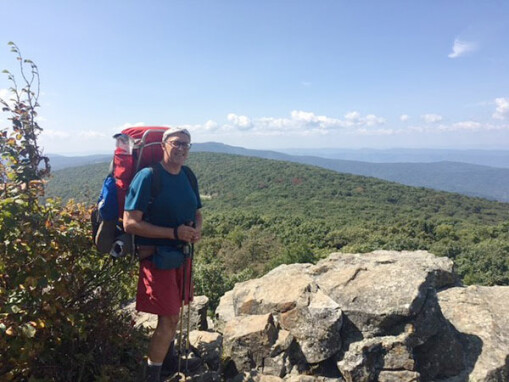 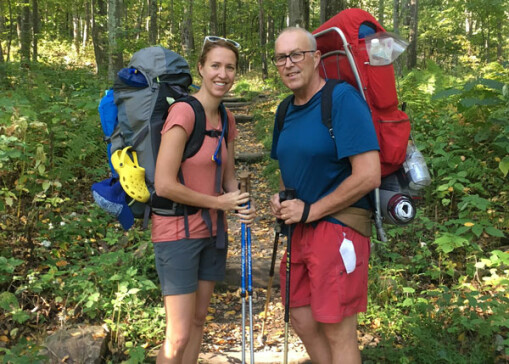 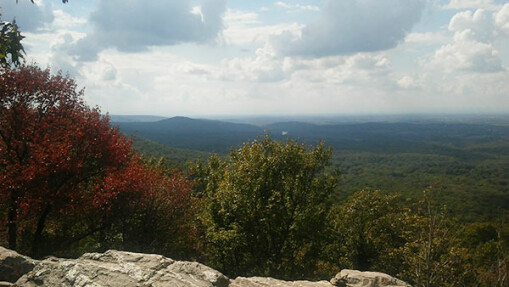 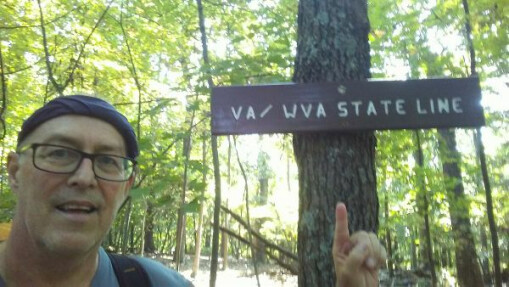 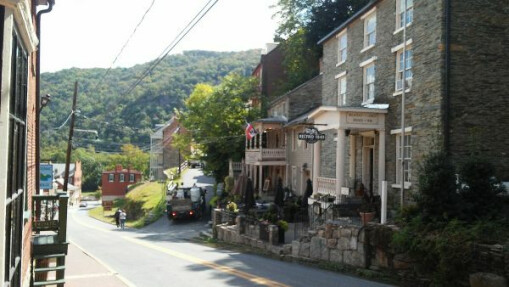 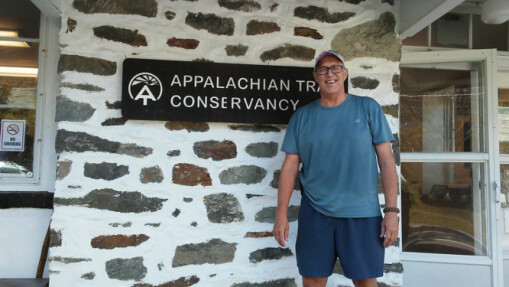 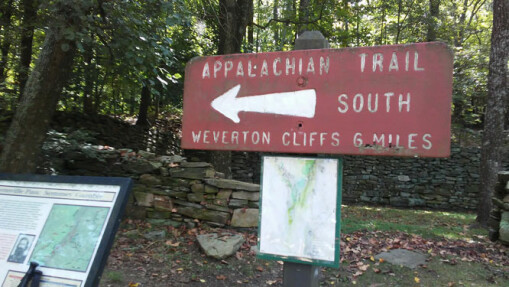 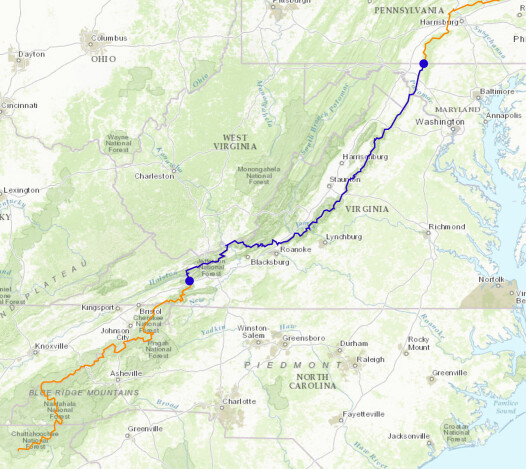