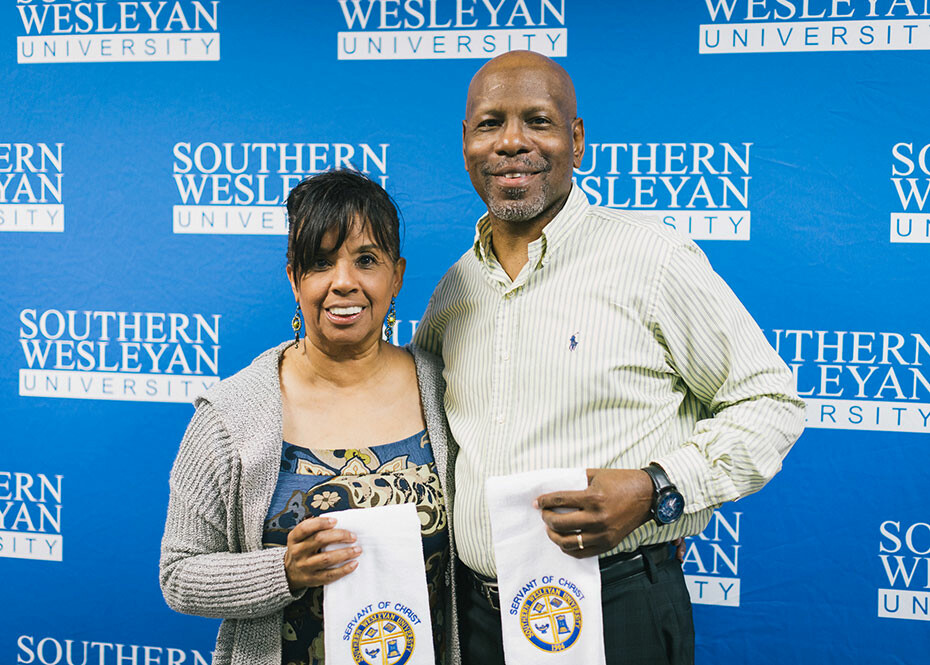 Bill and Sytrena Greer are pictured at a reception for graduates at SWU's Greenville education center.

A recent business management graduate of Southern Wesleyan University feels that earning his degree marks a valuable milestone as he advances his career.

Earlier in life, Bill Greer of Greenville had started on a career path to pursue construction technology, enrolling at a local technical college’s engineering program. He and his wife Sytrena raised their two daughters to value the gift of higher education while setting an example themselves. Both daughters earned college degrees in the state.

He watched as Sytrena worked toward her bachelor’s degree in human services after she enrolled at Southern Wesleyan University’s Greenville education center.

“We’re both Christians and she kept telling me how wonderful it was,” Bill said, noting how Sytrena’s professors deeply cared about their students’ spiritual growth, began class with prayer and stressed the importance of putting God first.

When a shoulder injury temporarily sidetracked Bill from his work, he recalls a chance meeting that ultimately set him on a new path.

“I attended the BMW Pro-Am at Thornblade, so I had to catch the bus into the tournament. I met a gentleman with Southern Wesleyan University and we struck up a conversation. I told him my wife attended SWU,” he said.

“I enrolled at SWU and then saw everything my wife experienced. I fell in love with the program and how it was set up for older adults, Bill added. “I work at BMW in 10 hour shifts. We didn’t get out until 10 at night, so the days I was off I had to put everything else aside.”

Looking back, Bill has no regrets.

“When I walked across the stage I felt it was worth it; I accomplished one of our goals,” he said. On the same day, Sytrena received her master’s degree in management and leadership. “We influenced our two daughters to get a higher education and finish, then they pushed me.”

Having worked for nearly 17 years as a production associate at BMW, Bill is optimistic that his degree from Southern Wesleyan will help him as he advances his career.