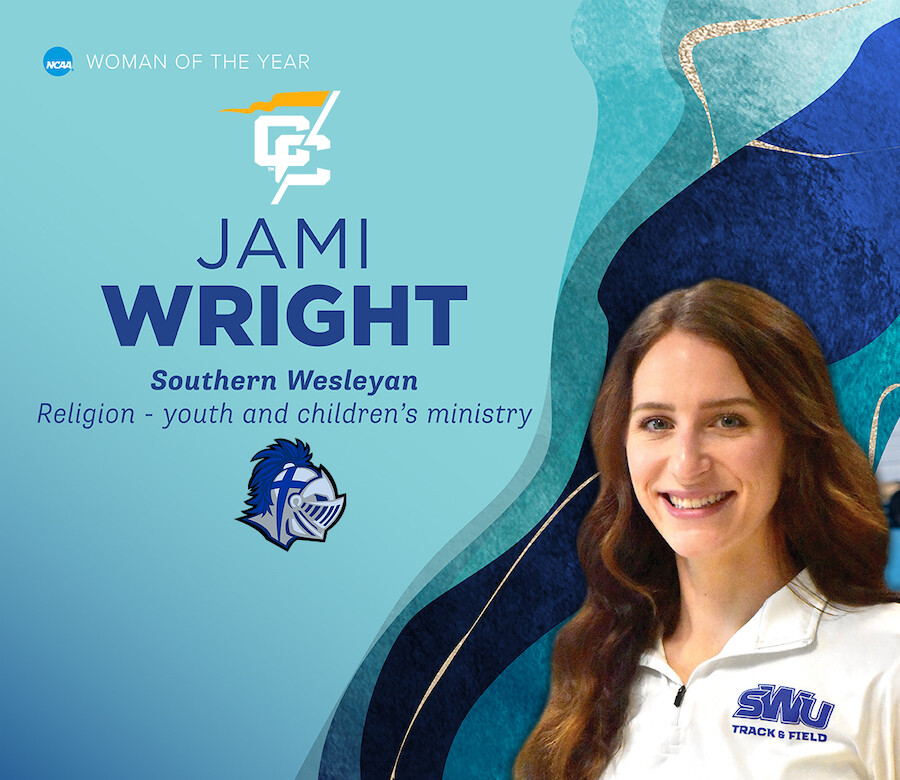 Indianapolis, IN - The NCAA announced the Top 30 Honorees for the 2021 NCAA Woman of the Year Award on September 23 with Southern Wesleyan's Women's Track and Field sprinter Jami Wright being among the thirty recognized.

"Jami is so deserving of this honor," said Director of Athletics Julia Reininga. "She is an amazing young lady. She has made a huge impact in athletics and in the campus and community. She is top shelf in every area of her life."

According to Conference Carolinas records, Wright will become the first top 30 finalist for the conference since Samantha Mitchell of Mount Olive was named a top nine finalist in the 2007-08 academic year.

"We are extremely proud of Jami for advancing to the final 30 for this prestigious award," Commissioner Chris Colvin said. "Jami has not only competed at an elite level in her career, but she has also shown amazing sportsmanship and high character throughout her career. I saw it firsthand when she competed in our Indoor and Outdoor Track & Field Championships over the last couple of years. Jami is the perfect example of what it means in Conference Carolinas to be a true champion in Body, Mind, and Soul."

Wright led the Warriors during the 2021 outdoor track and field season. The native of Stafford, VA earned All-Conference First Team finishes in four events (4x400, 4x100, 400 and 200) in the Conference Carolinas Championship on April 23-24. Her finishes during the semester allowed her to be named to the All-Region team in the 100 meters, 200 meters, 400 meters, 4x100 meter relay and 4x400 meter relay. She had three personal bests during the Spring 2021 regular season. She ran not only a personal best in the 200 at the Weems Baskin Relays on March 26 and 27, but set a new school record with a time of 23.58. Her time in the 200 was also the fastest time among all NCAA Division II women's track runners for the 2021 Spring season and was in the top fifty in the world at the time. She continued her impressive final season with the Warriors as she finished first in the 100 at the SWU Gotta Run Invite on April 3 with a time of 11.96. Her final personal best came on May 16 at the 2021 Aggie Classic Twilight as she ran the 400 with a time of 54.43.

After collecting four First Team All-Conference finishes during the conference championship and her impressive 200-meter finish from earlier in the season at the Weems Baskin, Wright was named the Conference Carolinas Track Athlete of the Year for the outdoor season. She continued to collect accolades as the USTFCCCA named her the NCAA DII Southeast Region Track Athlete of the Year, becoming the first Warrior to receive such an honor since the transition to NCAA DII. On May 18, it was announced that Wright would advance to the NCAA DII National Championship in both the 200 meters and 400 meters. Going into the championship, she was ranked first in the 200 and third in the 400 among Division II athletes.

At the 2021 NCAA DII National Championships for Outdoor Track and Field, Southern Wesleyan sprinter Jami Wright was named All-American in both the 200 and the 400 meters. In the 400, Wright finished in fifth place with a time of 54.49. She continued to impress in the women's 200 meter finals as she finished in fifth place in a close race that came down to fractions of a second between all nine runners. Her time of 23.57 allowed her to set a new school record.

"Jami is the type of athlete every coach desires, she out works everyone and puts the team before herself," said Head Track and Field Coach Greg Thiel. "Watching Jami work her way to national prominence has been amazing. Even more impressive than all of her accomplishments she has attained on the track, is the woman she has grown into. Her life in Jesus is truly the biggest blessing and such an honor to be a small part of. We want to thank Jami for all she has done for Southern Wesleyan University and the Track & Field program."

Jami Wright joined the Southern Wesleyan Warriors in 2017 as a freshman and made an immediate impact. In her first year as a Warrior, she received All-Conference First Team honors in both the Indoor 400 meters and the Outdoor 400 meters, 4x100 meter relay and 4x400 meter relay. She also received All-Conference Second Team honors in the 200 meters and long jump for the indoor season. Her finishes in her freshman season allowed her to receive All-Region accolades in six separate events. Wright returned in 2018 to continue to build her successful career with Southern Wesleyan. She was name All-Conference and All-Region in three events for the indoor season. The native of Stafford, VA continued to impress in the outdoor as she collected several more All-Conference and All-Region accolades.

In the outdoor 2019 season, Wright was a member of the women's 4x100 Meter Relay team that qualified for NCAA DII National Championship for Outdoor Track and Field to become the first group to advance to the platform for Southern Wesleyan. The team went on to run the seventh fastest time at the national championship to receive All-American honors. Wright also received several All-Conference and All-Region honors during the 2019 indoor and outdoor seasons. In her final indoor season of competition in 2020, Jami Wright hit three national qualifying marks in one day at the Conference Carolinas Indoor Championship. She advanced to nationals in the 200 and 400 meters before the 2020 season was canceled due to the Covid-19 pandemic. However, Wright was not done in 2020 as she received All-Region accolades in four events and was named an All-American for the 200 and 400 meters.

However, Jami Wright has had more than just a stellar athletic career for the Warriors. A Religion major during her undergrad, Wright focused on youth and Christian ministry. She got involved in the Alive Wesleyan Church Student ministries where she became a youth group volunteer and an assistant to the youth pastor. While there she led a small group of young girls and helped them navigate the transition from middle school to high school. Not only a mentor, Wright helped organize events and schedule volunteers at Alive Wesleyan Church. She received the Excellence in Youth and Children's Ministry Award from Southern Wesleyan in 2020.

A stellar student, Wright received several academic and presidential honors during her time with the Warriors. She impacted the entire campus and was named the Vice President of the Student Body during her junior year. Her work around campus did not go unnoticed as SWU's students voted her in as the Student Body President during the 2019-20 school year. While there she invested in not only the lives of her teammates, friends and community but the campus as a whole.

"I am so thankful for my time as an athlete at SWU," said Jami Wright. "If there's one thing everyone knows about me, it's that I love this school and the people in it. I have been overwhelmed by support and love from people at this university for the last five years and it has truly shaped me into the woman I am today. I am honored to be recognized as a nominee for this award and I'm praising Jesus for all the blessings I experienced at SWU!"

The NCAA Woman of the Year program was established in 1991 and honors the academic achievements, athletics excellence, community service and leadership of graduating female college athletes from all three divisions. To be eligible, a nominee must have competed and earned a varsity letter in an NCAA-sponsored sport and must have earned her undergraduate degree by Summer 2021.

Selected from 535 school nominees - a group that was then narrowed to 154 nominees by conference offices - the Top 30 honorees include 10 from each of the three NCAA divisions. All have demonstrated excellence in academics, athletics, community service and leadership. The honorees represent 12 sports and an array of academic majors, including biology, psychology, mechanical engineering, education, software engineering and anthropology.

"We are thrilled to recognize the 30 honorees selected this year," said John Kietzmann, chair of the selection committee and Associate Director of Athletics for Marketing at Metropolitan State University of Denver. "These women excelled in the classroom and competition, while still prioritizing serving their peers and communities despite the challenges they faced during the pandemic. They represent the thousands of women competing in college sports each year, and we congratulate them for their incredible achievements."

The selection committee will determine the top three honorees in each division from the Top 30, and the nine finalists will be announced this fall. From those nine finalists, the NCAA Committee on Women's Athletics will choose the 2021 NCAA Woman of the Year.

On Tuesday, Nov. 9, during a virtual awards ceremony, the Top 30 honorees will be celebrated, and the NCAA Woman of the Year will be named.

To learn more about the NCAA Woman of the Year program, please visit HERE.