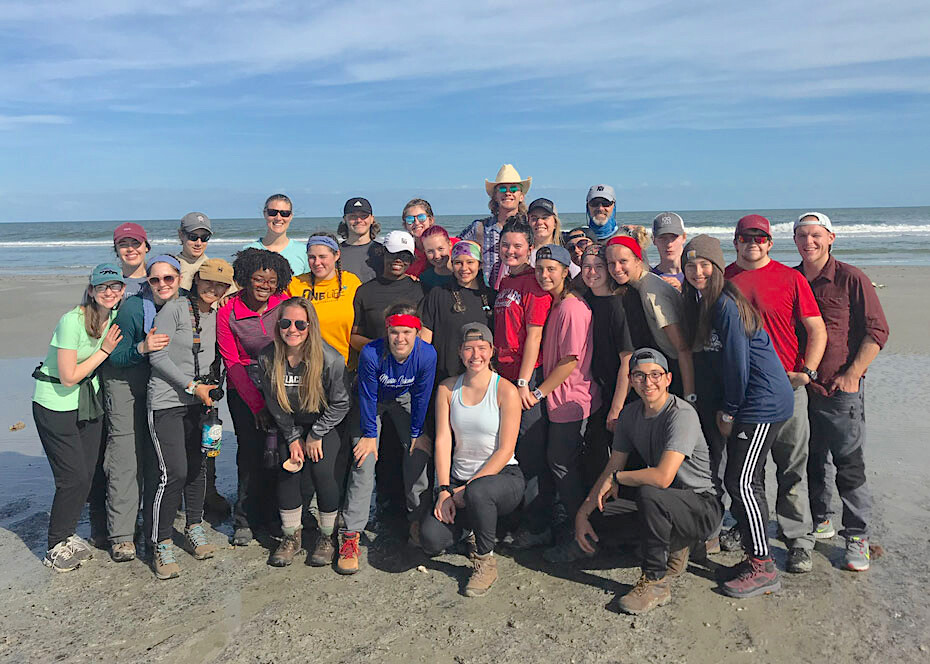 Students enrolled in the OneLife program at Southern Wesleyan University are pictured at Cumberland Island, an unspoiled coastal island in Georgia.

During a year when the Class of 2020 almost universally closed out their final weeks of class online, graduating high school seniors want to enter a program that offers more than screen time and some are taking a gap-year rather than entering college in a strictly online format.

Students seeking a gap-year program have discovered OneLife, a Christian discipleship program that’s all about experiential learning in close-knit community, helping students from diverse backgrounds clarify their callings, developing Christian character and relational skills to become servant-leaders – all while earning college credit. The nature of the program made the COVID crisis especially jarring for OneLife students when they left for Spring Break this year and couldn’t return.

Part of the OneLife experience is limiting the use of the devices we all use to alleviate boredom (phones, tablets, laptops, streaming devices). “We’re not anti-technology; we’re pro-community,” said Hunter. According to Hunter, limiting (not eliminating) device-use is aimed to foster creativity and focus, instead of distraction. And while technology had to play a larger role in the closing weeks of the spring semester, Hunter believes OneLife has stayed true to its core commitments. Staff worked hard to develop creative, team-based learning experiences, and students were still able to remain a cohesive community.

“When the COVID crisis struck, I think we were able to do things that were really helpful to students because we had already built a committed community together. It occurred to me that we’ve not had a group of OneLife students receive this level of support after going home before. Of course, we’ve never had a group of students go home for good in March before, and I hope we never do again,” Hunter said.

Hunter along with his team are looking to start strong in the fall, which increasingly will require imaginative approaches to organizing teambuilding trips in the outdoors and opportunities to develop skills in avenues of community service.

Looking to the fall, Hunter optimistically said, “In the past, we’ve blended outdoors and urban experiences at times. Because of the way things are, we’re probably going maximize the “outdoors” and skip the “urban” part of that experience. We’re also limiting air-travel by taking students to West Virginia instead of Colorado in September. We’re also going to take an outdoors backpacking trip in October while social-distancing guidelines are still more strongly in-effect rather than November as we had done previously.”

Hunter added that OneLifers will travel in October to Cumberland Island – a natural, unspoiled sea island at coastal Georgia, where wild horses roam among the ruins of a Carnegie family mansion. In addition, OneLife is still working out a trip to either Nashville, Tenn., or Washington, D.C. in November.

“The details of various trips and experiential learning opportunities are in negotiation because of the COVID crisis,” Hunter remarked, adding that OneLife intends to maintain their focus on providing a COVID-safe, creative, experientially based program for college students to grow with God.

This past year, OneLife partnered with Experience Missions on their trip to Israel in February, allowing them to be more than tourists.

“We spent a lot more time on West Bank and there was much more of a cultural immersion component this year, so we’re hoping to return with them next year,” said Hunter, looking toward a planned trip there in February or March 2021.

For college going students interested in maximizing their first year experience with faith at the center, SWU’s OneLife program should be high on their list of considerations!