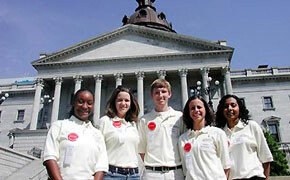 Students from Southern Wesleyan University traveled to Columbia to speak to legislators April 21.

The students expressed their appreciation to the S.C. General Assembly for the S.C. Higher Education Tuition Grants Program and other student financial aid programs. South Carolina Independent Colleges and Universities, a nonprofit organization sponsored the event.