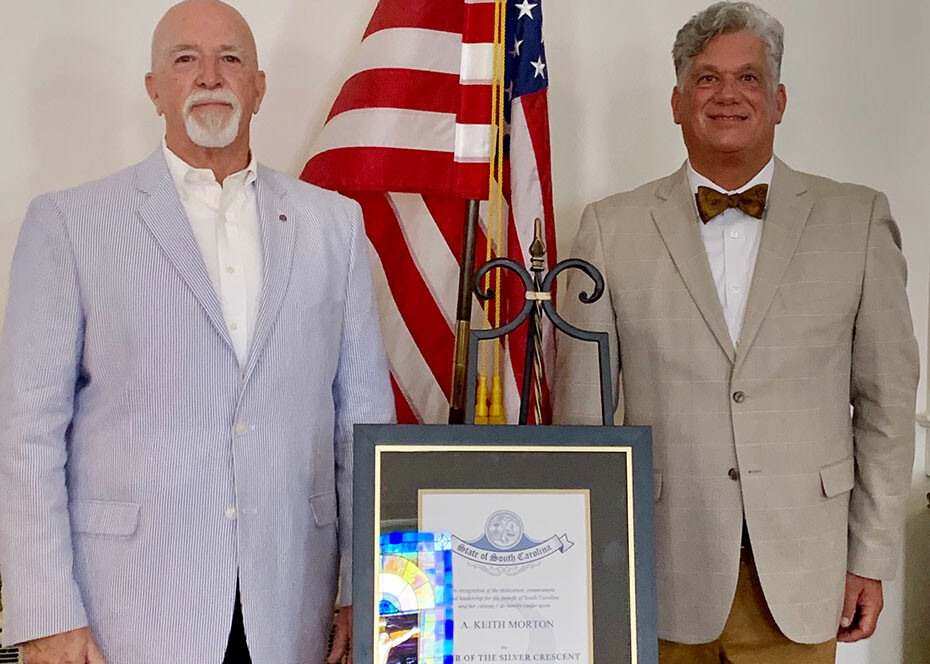 On behalf of S.C. Governor Henry McMaster, Rep. Mark Nye Willis presented Keith Morton, left, with the Order of the Silver Crescent. This is one of the highest civilian honors an individual can receive in South Carolina and honors the retired Fountain Inn police chief for his service to the community.

After more than four decades in law enforcement, Keith Morton retired in 2019 as Chief of Police of Fountain Inn, a town located just south of Greenville.

Those years of service didn’t go unrecognized for Morton, who is a 1988 graduate of Southern Wesleyan University. Rep. Mark Willis wanted to pay tribute to Morton’s dedication to law enforcement and his community, and on Aug. 30 he made a surprise presentation at Morton’s church, conveying from Gov. Henry McMaster the Order of the Silver Crescent, South Carolina’s highest civilian award, given in recognition of his significant contributions to the life and well-being of South Carolina and her people.

Morton credits his education from Southern Wesleyan as instrumental in achieving this honor.

As a young Greenville police officer, Morton encountered obstacles as he sought to further his education.

“You had to go to a brick and mortar classroom during their assigned hours, which was during the day at that time, and I was still trying to get my bachelor’s degree. You couldn’t get classes you needed,” said Morton, concerned that it would take him years to obtain a bachelor’s degree.

Then Morton learned about the LEAP (now SWU Online) program and began taking classes, some of which at the time met in the Greenville Law Enforcement Center, ultimately earning his bachelor of science in business administration. Morton also had the opportunity to play for one season on the Warriors Baseball Team.

“I could get a quality education but still keep my job. It was just a perfect solution for me – completing my degree and furthering my career. I knew that was the key I had to have to open that next door,” said Morton, adding, “I still keep in touch with some of the people I was in class with – we’re still friends.”

Morton wasn’t looking to leave the Greenville Police Department, but he found out about an opening for police chief in nearby Fountain Inn, so he applied and got the job.

“I was the only person who had ever worked for Fountain Inn Police Department that had a college education. When I left, there were three officers with master’s degrees and about 70 percent had a college degree or were enrolled in some college,” Morton said, emphasizing the importance of education for those entering law enforcement. In his 27 years as Fountain Inn’s police chief, Morton prioritized solid community relations with initiatives that included establishing summer camps for at-risk and underprivileged children, a senior watch program and a police academy. He also teaches higher education classes at Greenville Technical College and Anderson University and has collaborated on some classes with Southern Wesleyan Criminal Justice Professor James McDonald.