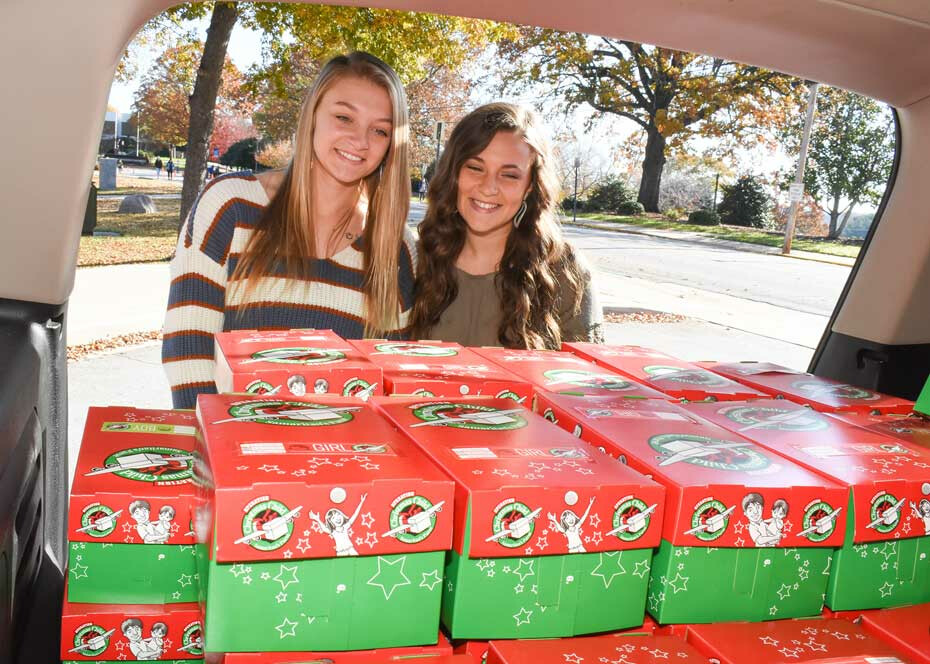 Makayla Sexton, left, and Aubrey Lewis unload shoeboxes they packed with gifts for Operation Christmas Child (OCC) before a chapel Nov. 20 where the donations were gathered and prayed over. Sexton is a Business major from Central and Lewis is a Recreation and Sport Management major from Easley. 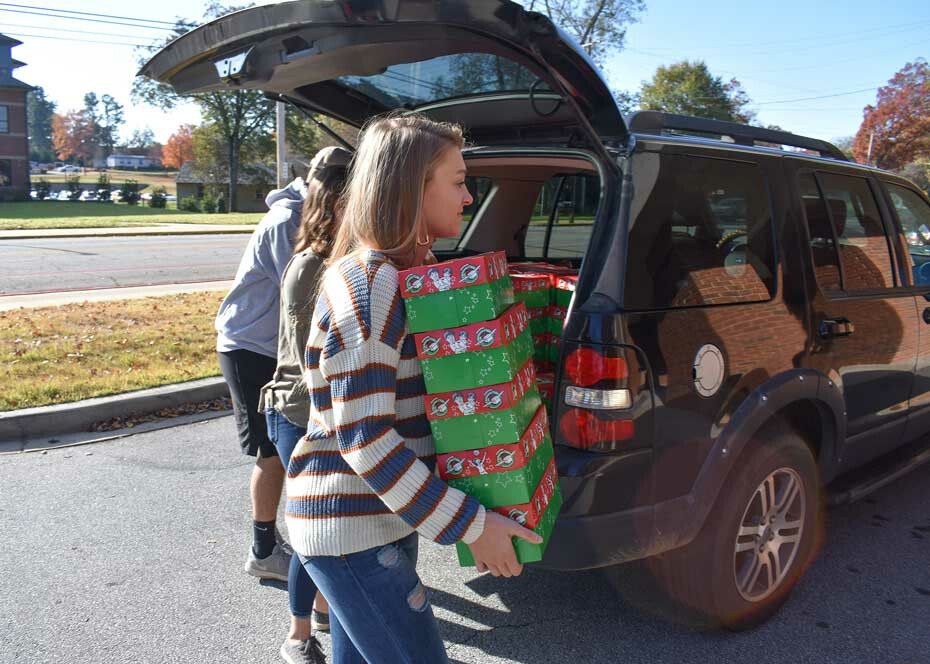 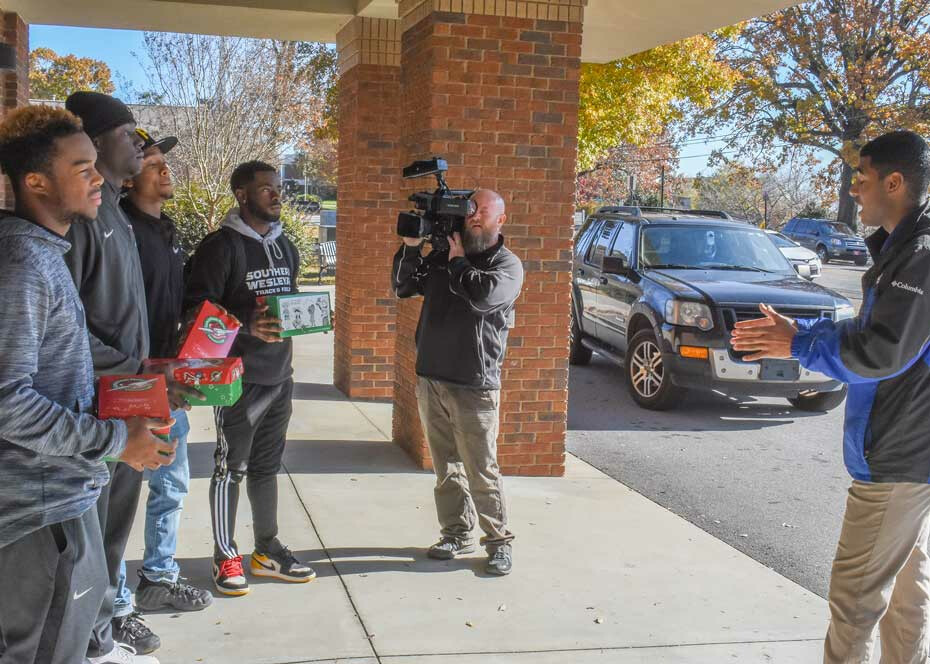 WYFF-TV reporter Allen Devlin, right, interviews Foundations of Success students about the shoeboxes they prepared for Operation Christmas Child (OCC) to bring Christmas to needy children throughout the world. More than 300 shoeboxes were brought into a chapel service Nov. 20 at Southern Wesleyan University in Central. 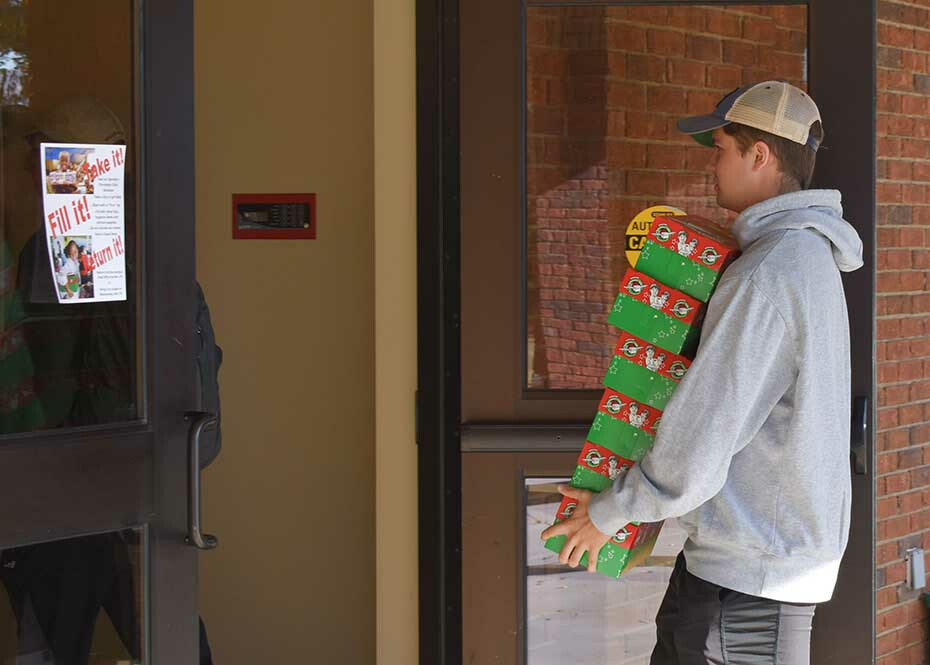 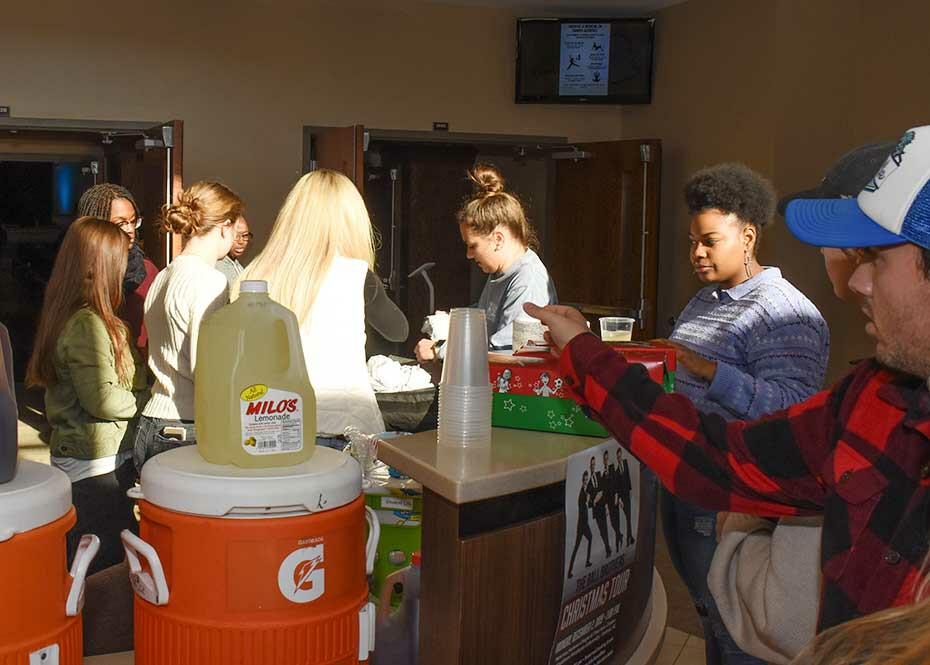 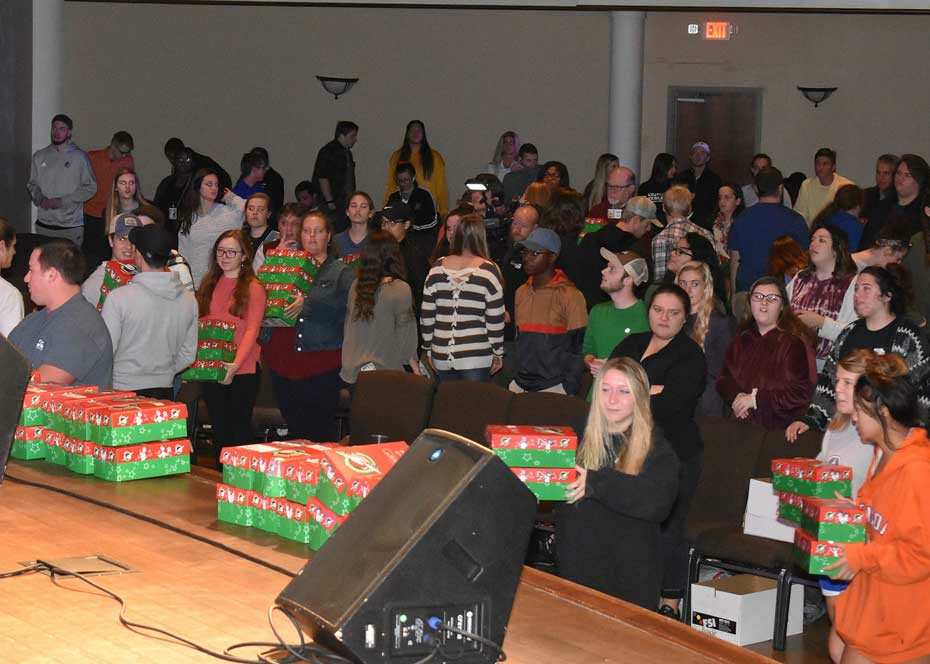 Students, faculty and staff bring their shoeboxes to the Newton Hobson Auditorium stage at the beginning of chapel Nov. 20. 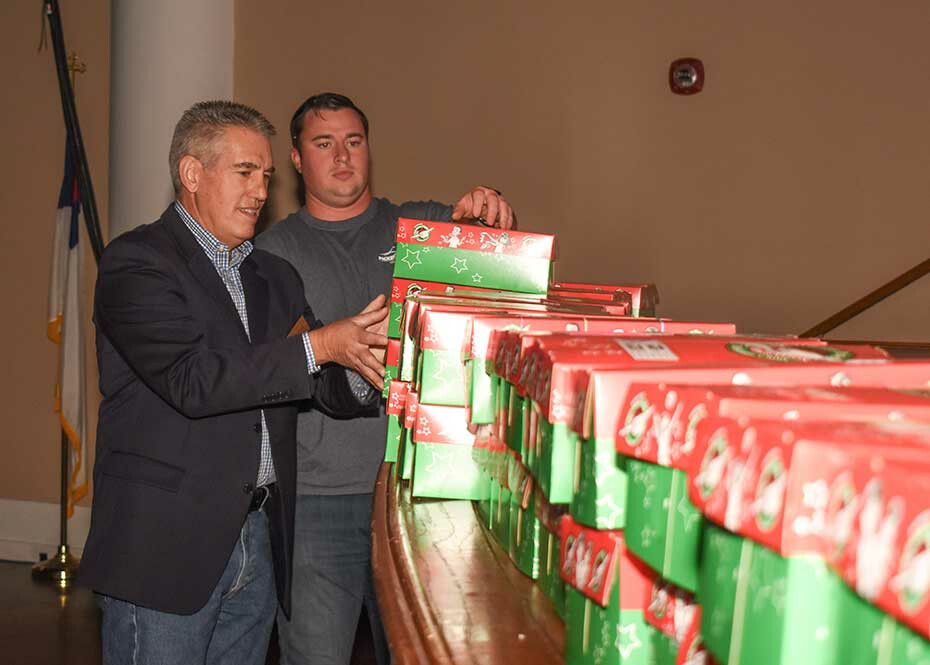 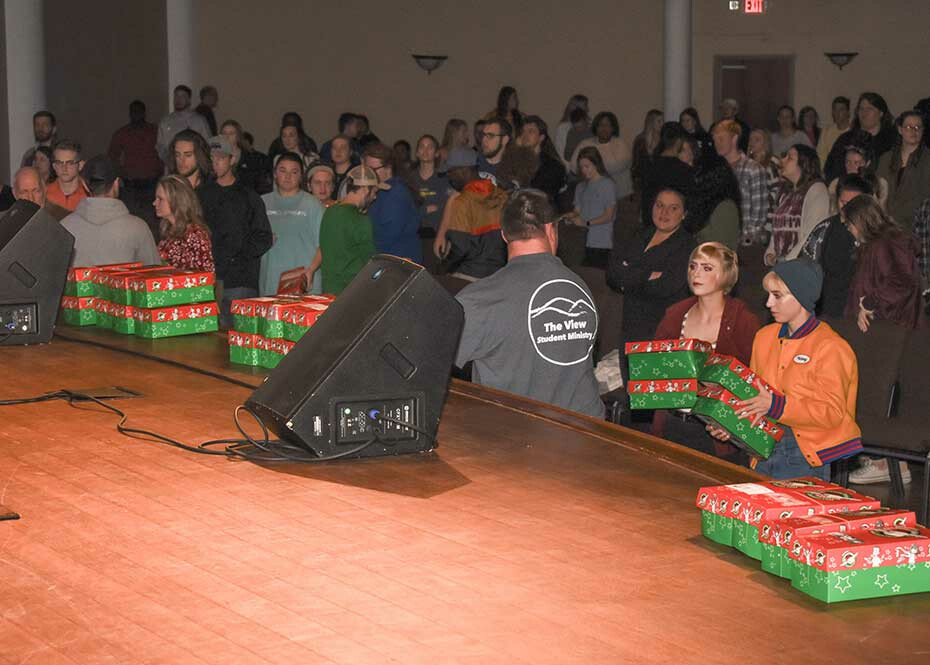 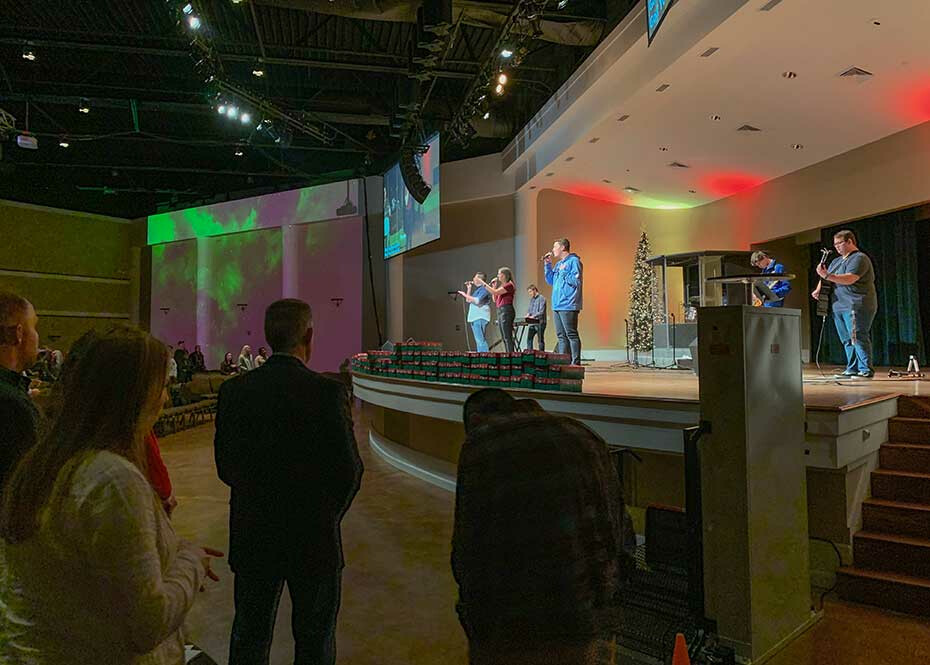 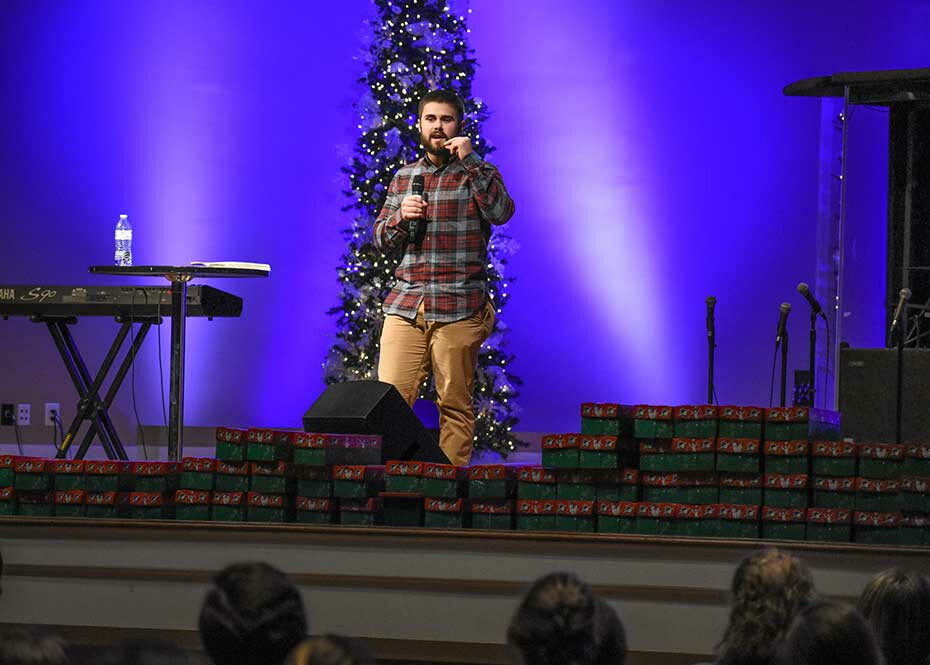 Landon Davis, a senior from Asheboro, N.C. majoring in Religion, spoke in chapel, concluding with a prayer of blessing for the shoeboxes destined for children around the world. 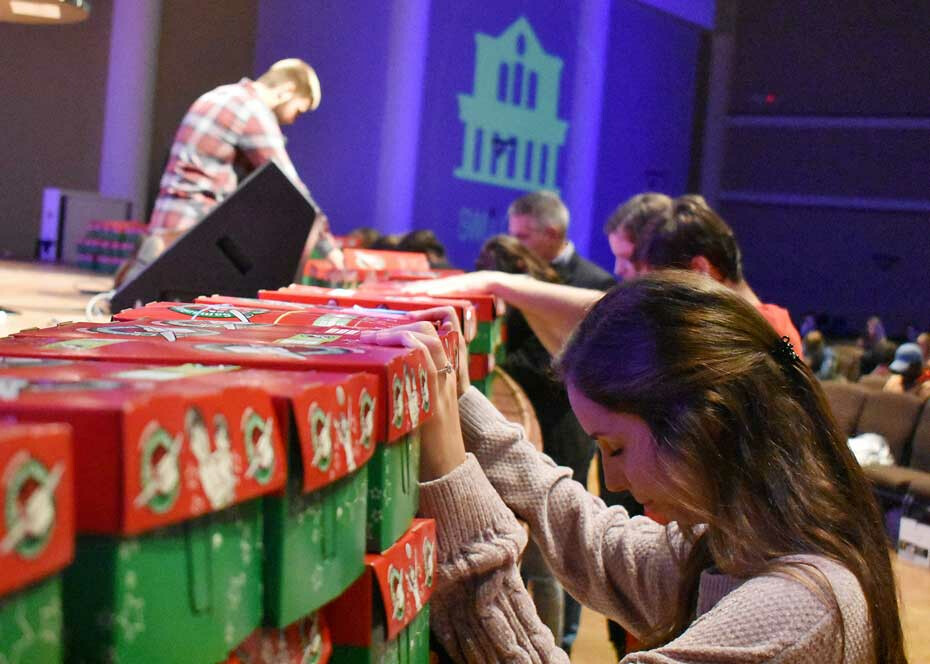 Southern Wesleyan University students, faculty and staff pray over more than 300 shoeboxes that were gathered Nov. 20 for Operation Christmas Child (OCC) to bring Christmas to needy children throughout the world. 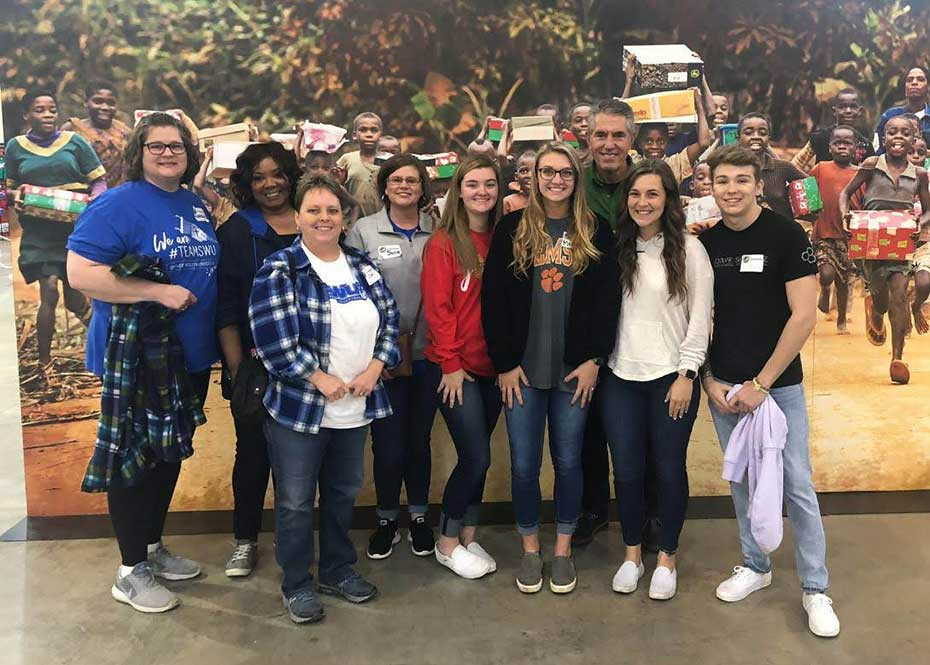 This year, students, along with faculty and staff, brought more than 300 shoeboxes Nov. 20 to a weekly chapel service in Newton Hobson Chapel and Fine Arts Center Auditorium on the Central campus. At the conclusion of the chapel, students, faculty and staff prayed over the shoeboxes as Landon Davis, a senior from Asheboro, N.C. majoring in Religion, led in prayer that God would bless the shoeboxes filled with gifts, saying, “We thank you that you have stirred students’ hearts to prepare these boxes. We thank you for the blessing that they will be to the people who receive them.”

Among the many students who participated this year were students in Prof. Mildred Williams and Dr. Karen Lee’s Foundations of Success class – through a service project that for some became a passion.

Aubrey Lewis, a Recreation and Sport Management major from Easley and Makayla Sexton, a Business major from Central, two of Williams’ students, set out to prepare a shoebox for each gender and each age group.

Lewis’ experiences with children during a mission trip to Africa this past summer drove home the importance of OCC and its mission.

“I have always had a passion for kids and to go and see them this summer and to spend a week with them. They have nothing we have, but they still showed me love all week long,” Lewis said, adding that she was moved by the children’s joy despite their lack of material possessions.

Sexton posted a fundraiser on Facebook hoping to raise funds so she and Lewis could buy enough items to fill their shoeboxes.

“About 45 minutes later we raised $60, but it didn't stop there. When we were done with softball practice I quickly realized that I had a crazy amount of notifications on my phone from Facebook,” Sexton said.  “Within four days we raised a total of $560.”

Lewis and Sexton started using their spare time between classes to shop for the gifts. Sexton quipped that they became friends with the cashiers at a local dollar store.

“Makayla and I really felt led to provide for as many kids as possible. We felt God laid this on our hearts and we really wanted to embrace the opportunity that was given,” Lewis said. “It’s good to know we can help others around the world and spread the love of Christ,” Lewis said.

“Realizing that a child somewhere else gets so excited for the small things we take for granted, such as a toothbrush, is so humbling,” Sexton said.

“It’s a wonderful opportunity for these girls to shine. “I'm so very proud of the passion and the work that these two young women did for the Kingdom of God,” said Williams, adding a note of thanks for all of the SWU students who donated shoeboxes.

A group of Southern Wesleyan students will travel to Operation Christmas Child’s packing center in Charlotte Dec. 10, then they will be placed on planes bound for destinations all over the world.

OCC is a ministry of Samaritan’s Purse. Details can be found at samaritanspurse.org.