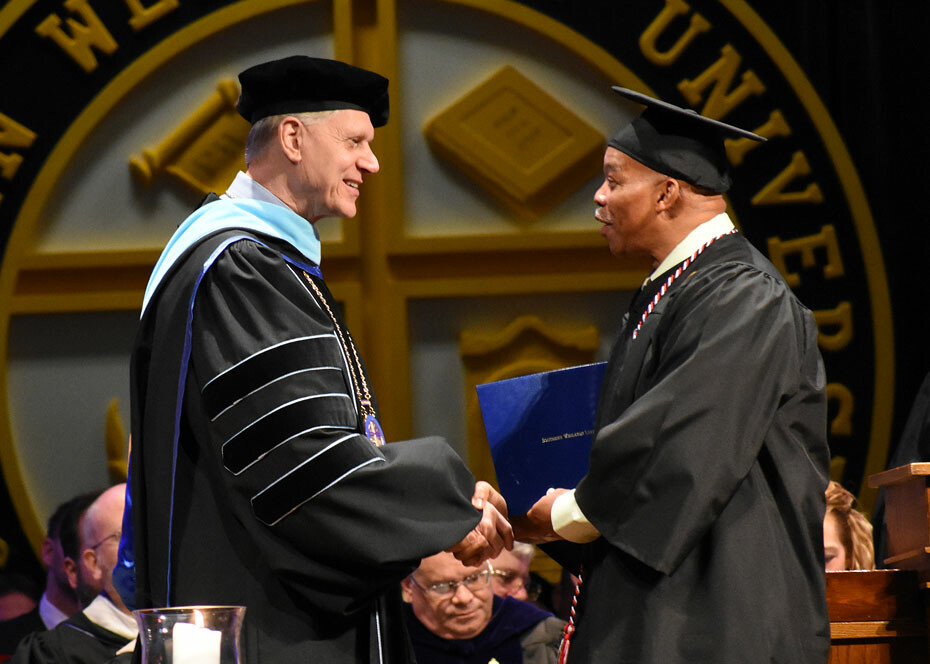 Within the U.S. Marine Corps, the saying goes “leave no man behind.”

Recent Southern Wesleyan University human services graduate Robert Colbert appreciates caring faculty and staff members who – in a similar sense – were there for him as he worked to complete his educational journey.

“I had a stroke in 2000, so that’s what led up to my college experience,” Colbert said. “I was paralyzed, so working with the neurologist when I was going through therapy, the next step was to try to recoup my brainwaves.”

Colbert first attended Greenville Technical College, where after taking developmental classes and going through regular tutoring, he earned his associates degree. Because of his stroke, Colbert had to learn through repetition, but earned “A’s” and “B’s,” consistently making the Dean’s List. Dr. Jeannie Knecht, assistant director of TRiO Student Support Services at GTC, provided Colbert with valuable guidance, helping him with remedial math and – even after he came to Southern Wesleyan – giving him guidance on how to write papers using APA (American Psychological Association) style.

“The determination he had to show to get through here first, then to go through SWU is amazing. To overcome what he’s overcome has been awe inspiring,” Knecht said. “He’s an amazing man.”

Colbert met a Southern Wesleyan University representative who visited the GTC campus and enrolled in the Human Services program. He’s grateful that God led him to enroll at Southern Wesleyan, where faculty and staff continued to work with him through issues related to his earlier stroke.

“A change of environment creates a little bit of confusion for me, so I’m pretty regimented. I have to do things repetitively,” Colbert said. “Those in the SWU program are very supportive. I can’t tell you how many emails I got where someone asked, ‘hey, how’s it going?’”

Cindy Trimmier Lee, who directs TRiO Student Support Services at Southern Wesleyan, got to know Colbert in the summer of 2018.

“He was excited about a fresh start and thrilled that we made every effort to include him as an online student. He was always very kind and was working extremely hard to recover from a stroke and to become a college graduate. He always responded if we called and welcomed our help,” said Trimmier-Lee.

“In the Marine Corps – we have a phrase that says attack and overcome. You are going to adjust as you go. You just have to stay on your knees and let God do the big part,” Colbert said. “At SWU, we always started with prayer - I never had that experience before and it literally gave me chills, because I didn’t know that was going to be done – even online that was huge. The instructors’ prayers were so thoughtful and so deep – certainly you need that to get through the week – it was an awesome experience.”

Colbert feels his education has helped his critical thinking skills, but also has cultivated in him an empathy for others – especially for fellow veterans who – like him – experienced PTSD. He would someday like to use that passion to work with veterans fulltime.

“I think it’s important to help motivate those who are slipping through the cracks. Just being able to say listen, I truly understand this because I’ve been there and done it,” Colbert said.

For details about SWU Online, contact Southern Wesleyan University at 877-644-5556 or visit www.swu.edu.